Here is the fishing report from up and down the beach today:

Don't forget to stop in and take a look in our walk in humidor. We have a great selection of cigars to help you celebrate your big catch or to enjoy by the fire on the beach.

Our friend Harris is pictured below with a 23" speckled trout caught today in North Avon using a popping cork.

Here is the fishing report from up and down the beach today:

We received a new order of stingsilvers today which are great for spanish and blues and the spanish bite was good today here in Avon and Buxton.

Don't forget you can rent fishing kayaks and get out there and enjoy the sound side of the island. We can set you up with popping corks, soft plastics and point your kayak in the right direction to put you on some fish!

FRANK AND FRAN'S HATTERAS ISLAND FISHING REPORT-07/29/2019
A great day for fishing in paradise. Off the Rodanthe Pier they have reports of Blues, Spanish and Sheepshead. In Salvo they are catching Croaker and Blues. Here in Avon we are catching Blues, Spanish and Pompano. Spanish reported in Buxton and Sea Mullet in Frisco. Hatteras reported small Blues and Flounder today! The water is clearing up and this week is looking great!

Come by and let us fill you in on some local knowledge, get you some fresh bait and help you out on where to go! Open 6am - 9pm D.A.I.L.Y!

Oh and every give a big Birthday shout out to Frank Folb, who without his knowledge, expertise and business sense in year past, the shop wouldn't be here! Happy Birthday old man! We love you and miss you!

FRANK AND FRAN'S HATTERAS ISLAND FISHING REPORT-07/26/2019
Another productive day here in paradise!!! Sea Mullet and Spot, as well as Sheepshead have been reported off the Rodanthe pier. Croaker in Salvo. Croaker and Sea Mullet off the pier here in Avon as well as Croaker, Spanish and Blues off the beach. Sea Mullet in Buxton. Sea Mullet and Blues in Frisco as well as Blues, Flounder, Spanish, and Pompano in Hatteras.​

Wow, the heat wave has finally broke here on the island and it is great! It is so cool tonight that folks were coming in to buy hoodies!

The fishing picked up today with the change in weather. Here is the report from up and down the island:

Soundside fishing was great with lots of puppy drum being caught on Gulp and Z-Man. The speckled trout bite continued to be good today as well.

The sea mullet bite has been great today with reports of sea mullet from Rodanthe to Frisco. Sea mullet are great eating. We had lots of folks throwing them back today since they were not sure. The mullet were being caught on shrimp and sand fleas.

Spot were being reported from Rodanthe south down to Avon. The bait of choice was bloodworms.

We also had reports of blues and spanish on Avon Beach and in Buxton behind the motels. They were being caught on frozen finger mullet and shrimp.

The speckled trout bite continues to be good early morning and right before sunset on the sound side.

Now that it is finally cooling off a bit, stop in and let us give you some tips to help you get out there and have some fun!

FRANK AND FRAN'S HATTERAS ISLAND FISHING REPORT-07/22/2019
The wind continues to blow here on the island and the water remains mucky, and nasty. The reports are consistent with reports of Sea Mullet, Croaker, and blues all across the board with no distinct change in size or species. Keep our fingers crossed that the wind will die down here soon.

FRANK AND FRAN'S HATTERAS ISLAND FISHING REPORT-07/20/2019
Another windy day here in paradise but that's not stopping our anglers from catching em. Up in Rodanthe they are catching Sea Mullet, Croaker, and Black Drum with a water temp of 80 degrees. In Salvo they have reports of Croaker, Spot, and Sea Mullet. Here off the Avon pier they are catching Croaker, Pompano, Spanish and Blues as well as Croaker and Spanish off the beach. Sea mullet down in Buxton as well as Sea Mullet and Spanish in Frisco. Finally, Blues, and Spanish in Hatteras.
FRANK AND FRAN'S HATTERAS ISLAND FISHING REPORT-07/19/2019
A exceptionally windy day here on the Island today with reports of Croaker as well as Sea Mullet in Rodanthe with a water temp of 80 degrees as well as Croaker in Salvo. Sea Mullet, Spot, and Croaker here off the pier as well as Croaker off the beach with a water temp of 81 degrees. Sea Mullet and Blues down in Buxton. Sea Mullet in Frisco and finally Pompano, Blues and Spanish in Hatteras.
FRANK & FRAN'S HATTERAS ISLAND FISHING REPORT - 7/18/2019 Well if you were out on the beaches today I hope you enjoyed your Hatteras Island Natural Exfoliation. From the reports we have received those who did were rewarded with Sea Mullet, Pompano, and Spanish.
While in the sound the Sea Trout are still around

Another hot day today with very scattered showers this afternoon! Fishing has continued to be doing well with Sea Mullet, Croaker and Spanish being caught on the beaches throughout most of the island. Blues were also caught today in Hatteras in Frisco!

Justin caught a baby Red Drum on the soundside this morning! Thanks for sharing, keep it up! Michael Dupont reeled in a beauty of a Speckled Trout also from the sound!

FRANK AND FRAN'S HATTERAS ISLAND FISHING REPORT-07/15/2019
Another day in paradise!! Lots to report today. Sea Mullet, and Spanish off the Rodanthe Pier. Spot, Pompano, and Spanish in Salvo. Spanish, Sea Mullet, and Croaker here in Avon. Spanish, Sea Mullet, and Pompano in Buxton. Sea Mullet and Pompano in Frisco. Spanish in Hatteras.
Posted Below:
1: Boyd Heckmans catch of the week.
2: Marie Poitras catch of the week.​
3. Almost a citation Pompano caught by the Scoots family from Midland NC.
4. The winner of our kids tournament Raphael.

FRANK AND FRAN'S HATTERAS ISLAND FISHING REPORT-07/14/2019
Another Beautiful day here in paradise. The weather is beautiful, and the fishing is Awesome! Sea Mullet, Spot, Croaker Pompano, Blues and Spanish being caught from Rodanthe to Hatteras village. Along with the occasional Sheapshead.

Also there have been Speckled Sea Trout, Flounder Drum, and Sheapshead being caught on the sound. Pictured below are Anglers aboard Chocolate Lab Charters who had a great day. The last p... 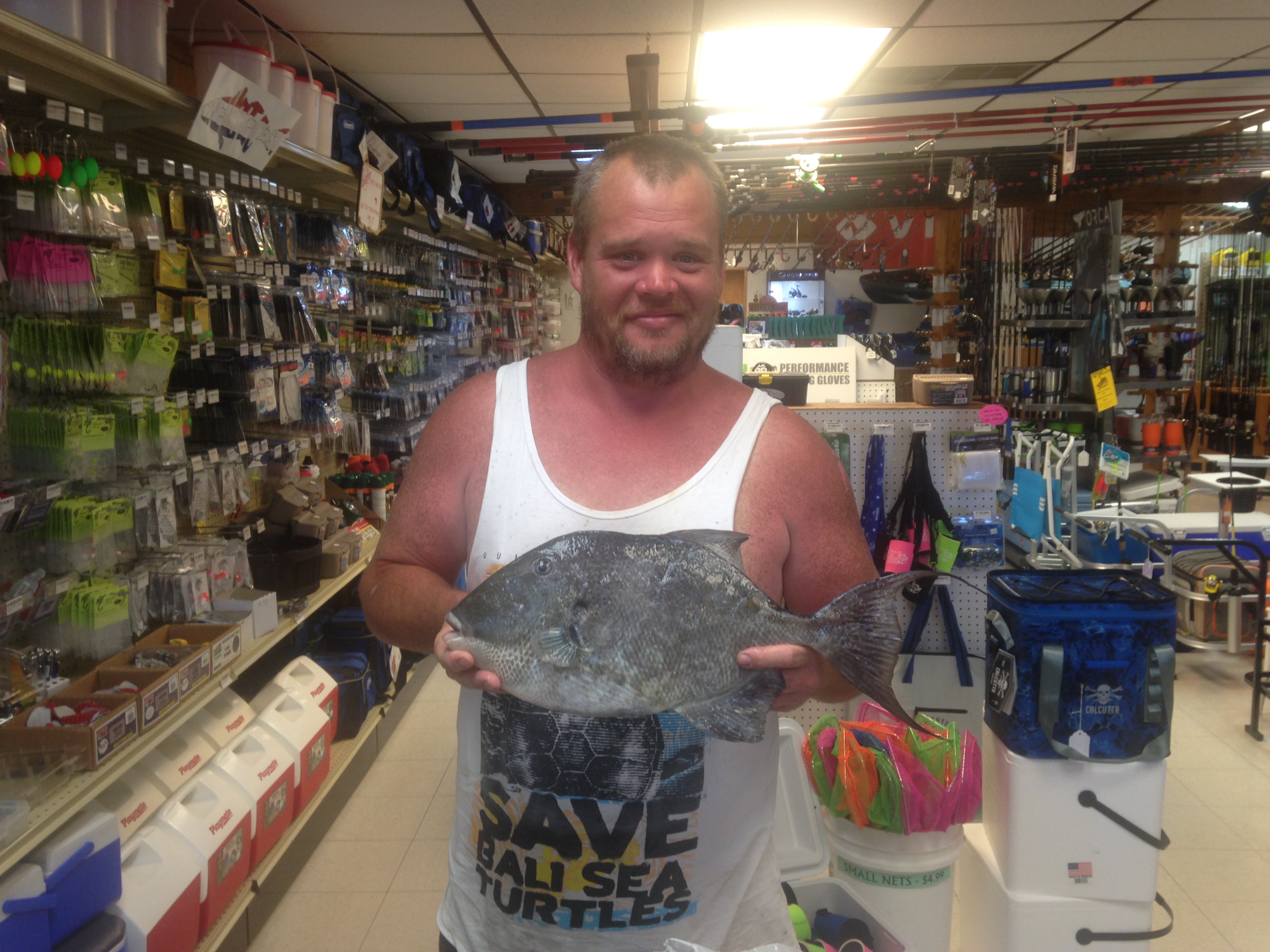 FRANK AND FRAN'S HATTERAS ISLAND FISHING REPORT-07/13/2019
A beautiful day here on the Island now that the wind has finally calmed down and given the anglers a chance to get out there and fish for something worth keeping!!!
In Rodanthe, there have been some splendid reports of Sea Mullet, Spot, as well as Sheeps head with a water temp of 74 degrees. Spot, Croaker, and Sea Mullet in Salvo. Here off the Avon pier they have been catching Spanish, Croaker, Sea Mullet, Blues, and Pompano with a water temp of 84. Nothing too significant in Buxton with the exception of a few Sea Mullet . Sea Mullet and Pompano in Frisco with a water temp of 84. And finally, Spanish in Hatteras.
FRANK AND FRAN'S HATTERAS ISLAND FISHING REPORT-07/12/2019
Steady flow of a nice selection of fish being caught up and down the beach with reports of Pompano, Sea Mullet, and Croaker. Sea Mullet, Blues, and Sharks. Sharks, Mullet, and Rays off both the pier and beach here in Avon. Reports of Black tip sharks in Buxton. Pompano in Frisco and Spanish, Blues, and Pompano in Hatteras.

Beautiful day here with some pretty good SW winds for the day. Looks like we may have some storms come in for the evening with strong 12-17mph SW winds again tomorrow!

Also pictured is Raphael, with his 2nd Drum from the Soundside this week!

Last but not least is Dennis Adams with his new Puddin-Tane rod, he lovingly purchased and named after our very own, Ginger! Its a beautiful 10'6" Tica 1-3oz and he's ready for a casting contest!

Here is the report from up and down the beach for today.

Want to have some fun soundside, did you know that Frank & Fran's rents Vibe fishing kayaks? They are a great way to spend the day exploring or hooking into some speckled trout on the sound. Plus if you like it, we will credit the rental fee towards the purchase of a new in-stock kayak!

The picture below is from Jeff Walston's catch in 2018 from his kayak in the sound.

Fishing has been a little slow today. The best reports have been blue fish on cut bait and spanish on metal lures here in Avon and the speckled trout fishing on soft plastic artificial lures has still be good early morning and early evening.

Here is the report from up and down the beach for today.

Don't forget we also have clam rakes for rent and all the supplies you need for crabbing which can be a lot of fun for the kids.

Pictured below is T.J. Frazier and his son who hooked up on some stripers in Oregon Inlet today.

Raphael is also pictured below having a great time fishing with his new gear from Frank & Fran's.

FRANK AND FRAN'S HATTERAS ISLAND FISHING REPORT-07/06/2019
A nice day today here on the island and a productive fishing day. Hope the wind doesn't pick up too bad. Reports of Sea Mullet, Croaker, and Spot off the Rodanthe pier with a water temp 72. Sea Mullet in Salvo. Spot off the Avon Pier as well as Spanish off the beach. Spanish in Buxton as well as Frisco. Spanish, Blues, and Pompano in Hatteras.
POSTED BELOW:
Cameron Liston 1lb 72oz Sea Mullet
Christopher Scarborough 2lb 2oz Pompano.

The morning started out a bit cloudy and questionable, but the afternoon and early evening has turned out to be absolutely beautiful! Spot, Croaker, Sea Mullet and Blues continue to be caught with a great Spanish bite early morning and late evening at Ramp 38 again last night!

Ramp 38 will be a happening spot tonight as its the closest open ORV ramp to the Avon Pier with many people coming to grill out, enjoy some beverages, friends, family and fireworks! We ask everyone to remain safe and courteous to each other! Though we're normally all about fishing, please watch out for the kids in the water this evening, let's not chunk anyone in the head with a sting silver or a 4oz weight! That will definitely put a damper on the celebration!

Remember this is the day that so many man and women have fought for us to have, to enjoy and to celebrate! We are Americans and We are Proud!

Today was a hot one with some afternoon storms rolling in.
The spanish mackerel bite has still been good today from ramp 38 south down to ramp 55. They are being caught on stingsilvers, glass minnows, Hopkins lures and Got-cha plugs.

Here is the report from up and down the beach.

Tomorrow is the 4th which means it is free fishing day here in NC. Residents and non-residents do not need a license to fish. Stop in grab some gear, bait, ice and cigars and head out there and enjoy the day. We also have plenty of wicking shirts (Frank & Fran's and Huk) and hats (red, white and blue and drum flag design) to help keep you cool and safe!

​Fishing has been best early morning and early evening. Spanish mackerel has been the top contender and the largest we heard today was 5 pounds. They are being caught on stingsilvers, glass minnows, Hopkins lures and Got-cha plugs.

Here is the report from up and down the beach.

The 4th of July holiday is just around the corner. Don't forget to stock up on firewood, cigars, fresh bait, new cooler full of ice and a Frank & Fran's koozie to keep those drinks cold!